It is hard for me to tell the difference between natural disinclination to rise early and the times when it truly is a bad idea to get up for a workout, but this morning it did seem to me that I had slept scantily and poorly enough that it did not make sense to get up at 5:30 to go to the pool. I am in any case viewing the Friday 6am swim as optional - Monday and Wednesday are mandatory, barring absolute sleep disaster!

So I rested for another couple hours (dozing rather than actually sleeping), and went out for a sea swim instead in the later morning.

I had a notion about taking pictures of marine creatures as part of my sea swims (using Brent's ingenious underwater camera with ankle tether), but the experiment is a failure in the sense that I made myself quite queasy with sea-sickness - there's a fair bit of swell this morning, so I might have felt a bit sick anyway, and of course I am underslept, but I think the interludes where I stopped my watch and bobbed up and down trying to photograph things on the sea floor contributed to it.

(There's a 10K swim I'd like to do this fall, but my queasiness out there today was such that I suddenly wondered whether it is such a good idea after all!)

Anyway, 45 minutes swim plus creature-chasing interludes. I share with you two pictures of appealing creatures - the ray with attendant fish, and one of a pair of sea turtles (the other had gone by the time I sorted out the camera). I took pictures of some fishes, but they were too small and too far away to come out much good - I am not one of life's natural photographers. 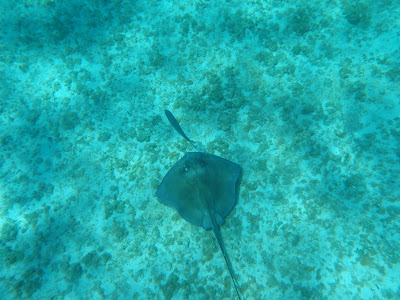 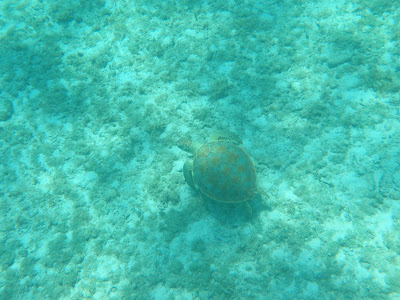 Oh, the turtle is particularly delightful enlarged! The patterns on head and carapace show very well!

Re: nausea in waves -- I find this more of a problem with fatigue. I would say with adequate sleep, practice in busier seas and/or dramamine the 10K is quite doable.