Otherwise known as procrastination when I should be typing up edits on my essay!

(Apologies for difference in image sizes - I have pasted them in piecemeal, and cannot be bothered to figure out the resizing possibilities!)

The tri bra top is basically a sports bra made out of material suitable for immersion in water, and notionally styled so that it could be worn on its own (not by me, I do not have the figure or the temperament to run in one of these on its own, I will wear a shirt on top! - but it is in theory part of the design mandate for many of these tops).

If you were on a very tight budget, you could certainly use a regular sports bra instead of a tri-specific one (I have even worn a sports bra and tri shorts now and again at Chelsea Piers when doing a swim-spin combo & having forgotten the tri-specific top); some racers will have a full-length sleeveless tri top either over one of these or instead of it, but I prefer a short-sleeved real bike jersey for my ride so I usually wear tri top and shorts for the swim (alone or under wetsuit depending on temperatures - maybe a throwaway cover-up t-shirt if I am going to be hanging around a long time pre-race and don't want to be half-nekkid), then don the bike jersey in transition. I've also seen fast women racing the "stroke and stride"/aquathlon-type race wearing one of these under a regular women's bathing suit so as to have additional support on the run.

The tri top I have used for a long time is a Tyr one much like this. It's my fourth season of triathlon, strange to say (this was my race report for the first triathlon I ever did, the Florida 70.3 three years ago in May 2008!), and I've worn this top a lot in training as well as racing; it never was as good as a real sports bra for longer-distance runs, and it became increasingly floppy with age, plus seams that once were relatively chafe-free started to give me more trouble.

Since triathlon is a gleefully expensive hobby, and since a long-course IM-branded race is one of the best ways imaginable to rationalize leaching large numbers of dollars from the bank account, I thought this would be a good time to upgrade...

I picked two different ones to buy based on some digging around online.

The first one was the Pearl Izumi women's elite crop (in pink and gray, or "flamingo and shadow grey" as they would have it).

The second was the Zoot women's tri bra top (I think that's the model I got, but am not 100% sure - color "Caribbean" as pictured, i.e. turquoise and yellow). 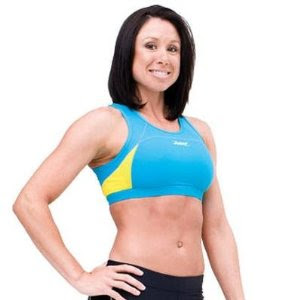 I have now tested them both on bike and run (the latter is the more crucial test). I think the Pearl Izumi has a slight edge from a strictly run-specific point of view, and is pretty certainly the one I'll use for my race. The Zoot top is great, though; it felt a bit less supportive during double spin class last week, where we do a lot of the dreaded 'running on the pedals,' but in fact when I wore it for my long run yesterday it was absolutely fine. Any sports bra of whatever description will need some Bodyglide to be chafe-free on a 2-hour run, I think, but I was surprised by how comfortable the Zoot felt. Also, on a strict independent-identity-as-top point of view, the Zoot comes out ahead because it has more coverage; I am thinking about getting another one for regular non-athletic summer wear, under a low-cut t-shirt. I like the blue-and-yellow color scheme better than the pink-and-gray, but the pink one goes better with the other gear I'm wearing, insofar as this is a factor!

(This is the bike jersey I will wear - since I train in one like this, using a sleeveless top would be a recipe for disastrous sunburn - and I'll change into my 'cerise' Patagonia Draft t-shirt for the run. This amazingly lightweight and comfortable shirt is in a suitably lurid and celebratory color scheme - when I was running in the park yesterday, a baby girl sitting on her mother's lap on a park bench noticeably coveted it, and reached her hands out to me each time I went past them!) 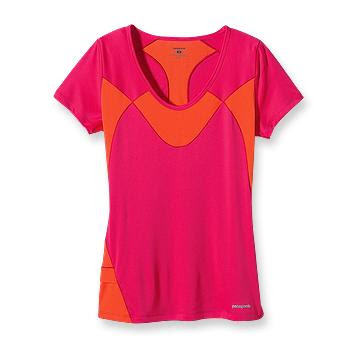 For someone who has always had near-complete lack of interest in clothes, other than a strong opinion that things need to be plain and without off-putting details, I sure spend a lot of time and money on triathlon garb - I wish it were nearly as interesting or appealing to find nice things to wear in the 'real' world, but I simply cannot enter into the spirit of it in the same way!
Posted by Jenny Davidson at 6/01/2011 04:14:00 PM

I had that Zooz one for several years (in orange with, I think, pink, though memory is hazy.) I loved it. Compared to other bras of that nature its elastic stayed strong for a long time. It was still quite functional when I finally got rid of it--the stitching gave out before the band. Last year I bought a navy 2xu one because if I was going to be half naked in front of people I refused to do so in garish colors, but I regret it--it's not really good for much apart from being navy blue. It's been on cross-training duty pretty much since I bought it.

Danielle in Iowa in Ireland said...

I have mad a moratorium on buying of new running/tri gear. But I am sure if I signed up for an IM, that moratorium would go out the window!