I took today off--sleep deprivation made even a nice short run seem mildly inadvisable. School stuff is crazy this week!

The strange thing about the fact that I am doing a (huge!) triathlon next week is that it seems to me much of the time almost as fanciful as if I had decided that I was going to take up mind-reading or learn how to use a magic wand properly. I have thrown myself very fully into triathlon training, and it happens that I have a very vivid and strongly developed imagination, but the texture of the thing feels less like an actual realistic plan than like when I used to play an elaborate game of witches with my friends in third grade in the graveyard behind the school. I have never done anything athletic seriously before!

Let us say that I imagine myself very vividly as a triathlete, only I am well aware that it is an act of the imagination, or even a sort of fiction...

I have been thinking a lot recently about what a large and wonderful pool of swimming teachers and mentors I have found over this past year! It is somewhat amazing--I have always been very greedy for learning, and fairly well adapted to finding teachers, but swimming has cast up an embarrassment of riches (I am mentally accumulating the elements of a post-race swim-related post in this regard, I am going to write a long screed of praise).

I am lucky, in my life in general, to have been always a person who could persuade other people that my own plans were worth taking seriously. (Like when I was ten and eleven years old, I was writing a novel, very seriously, which I called "my bestseller"! Parent: "Where's Jenny?" Brother, with no satirical intent: "She's upstairs writing her bestseller.")

I am not sure this is particularly to my credit. On the contrary. It is more simply a matter of having a strong will and, as I mentioned before, a vivid imagination, the ability to project myself into the future and then figure out how to get there from here.

(I still have not written an actual bestseller!)

So my family members, although it is very strange to them that I have undertaken this project which is not at all what one expects of one's strong-willed and self-disciplined and focused but extremely sedentary relation, have certainly been very supportive. They still think I can do whatever I set out to do. And I have all sorts of teachers and coaches and training partners who have been extraordinarily helpful also. But the group whose support makes me feel particularly thankful are my students!

They seem unquestioningly confident that I can do whatever I set out to do--like, really, if I said that I was going to climb Everest next year with no oxygen, they would calmly greet this with the attitude that obviously anything I tried I would accomplish with ease and panache! Which is at once untrue, flattering and deeply confidence-building. Their confidence in me gives me more confidence in myself!

I think I have had conversations about swimming, literally, with at least fifty different Columbia-related people over the last year! There were some good recent ones at the grad-student-sponsored department party, and I whiled away a pleasant hour at a party this winter for candidates for a fellowship whose governing board I'm on with conversations about swimming the Bosphorus (apparently the Byzantinists do it every summer, as a group!) and the amazing pool at the University of Chicago. Talking triathlon is a way of making a connection and also, sometimes, stirring triaspirationality in the other person also, though mostly it just lets me indulge my obsession...

All this is a roundabout way of saying that I am extraordinarily grateful for my students at Columbia. They are quite lovely! Presents are optional, really I am just grateful for them in themselves, but I got a very touching present the other day from a special student for whom I'd written a letter of recommendation to grad school. She mentioned, on her CV, that she was an amateur triathlete, and we had several very enthusiastic conversations along these lines. She came by my office the other day to let me know she's gotten in to the first program she'd applied to, with a lovely note (thanking me, also, for introducing her to the term "Jacobite," which had been the answer to a clue in that day's Times crossword!) and a most thoughtful triathlon-related care package. A picture of whose items follows below, the prompt for this post: 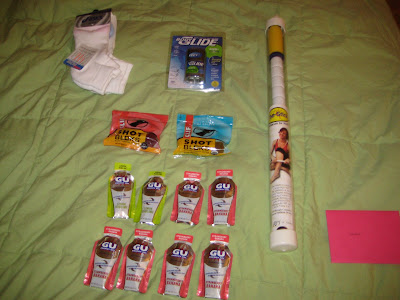 A very nice post and a lovely care package!!!

As one of said former Columbia people, I did a bit of a double-take when you said that you were surprised that we automatically think you can do anything...it may be surprising to you, but it's comes very naturally to us! I think you may be made of magic, actually, and so OF COURSE you can do anything! I will be thinking lots and lots of happy thoughts for you over the next few weeks - I'm just so excited for you!

That was a very, thoughtful, very nice gift for you. Your students obviously care deeply for you.

And you are going to love The Stick. I use mine after every run.