I think I can now say that I am a no longer merely aspirational triathlete, though in fact I will have to describe it as swim-bike-walk rather than swim-bike-run--I don't know the exact temperature, but by the time I got off the bike and onto the start of the run course, it was well into the 90s. Sunny exposed course, very little shade, extremely high humidity...

My legs felt great, I really took it easy on the bike and my fueling had been fine up to that point, but even a slow jog was clearly going to send me into total heat overload. So I walked it, a strong brisk walk that was also certainly more psychologically satisfying than the walk-run stagger, making sure to keep on taking lots of ice and water and gatorade and gels. And I felt very cheerful the whole way--aside from the heat, I just haven't done enough bike training yet to be in a position to race something at this distance, and it was enjoyable pretty much throughout and immensely educational and satisfying...

(In particular I have a far clearer idea now about the logistical stuff!)

1. It was a very well-organized and clearly marked swim, and I now have a much clearer notion of what I need to work on as far as open-water skills go. My time was quite slow, partly for the good reason that I was deliberately taking it at a very, very easy pace and partly for the bad reason that whenever I lift up my head to sight the buoys (and they were very close together and easy to see), my legs and hips just sink down in the water at a very great cost to streamline and body position! This is a very good, very clear thing to work on. About one stroke out of every ten, I would get the right flick of the hips and body rotation, but then something would distract me and I'd be practically upright in the water again as I sighted! I did bilateral breathing for the whole swim, it felt extremely comfortable and it worked especially well in terms of me always having a sense of the buoys, which were on the left-hand side.

2. The bike ride was great. It was certainly by far the most enjoyable bike ride I have ever had in my life. I still felt a bit nervous for the first third or so, but the middle third was lovely--there was a rainstorm, it cooled down a lot, there were a couple challenging-but-not-too-challenging hills, I started to feel a lot more comfortable on the machine itself. I faced yet again the fact that I simply do not live in a location where it is easy for a nervous and timid cyclist to put in time on the road--this was an ideal riding situation for me, almost the whole course had a lane fully blocked off for bikes, and at the back of the pack where I was riding there really is nothing crowded or stressful about it, the bikes are very nicely spaced out. Up until mile 40, I really was feeling excellent--miles 40-50 were good still but I was ready for it to be over--and the last six miles just seemed to take forever, I was very impatient to be off!

3. This is ludicrous--how can I be this nervous a bike-rider and have actually done a triathlon?!?--but my greatest moral triumph of the day was that I actually by mile 40 felt capable of poking around in my bento box to dig out Clif Blox and keeping only one hand on the handlebars while I popped 'em in my mouth! For the first thirty miles I actually just got off my bike to eat, because I knew nutrition was important and I just did not have the confidence to keep the hyper-responsive bicycle going in a non-weaving line while fiddling around...

4. I am so inexperienced and timid a bike-rider that it's going to be a while before I can really race a triathlon. I'm nervous about the bike leg of the New York City Tri in July, because I think that is actually going to be a much more stressful ride--this course was pretty much ideal for me, a very good confidence builder.

(5. If I had known I was going to walk the run course, I would have ridden quite a bit harder!)

These times will not look like anything to be proud of, but they are quite an achievement for me, and I hereby vow that if it is humanly possible, it will be three years from now and I will be able to race a half-iron course with a realistic goal time in the 6:00-6:15 range!

(I am far to the back, but I will get further forward soon I am thinking... my ultimate goal is to come nicely and solidly in the middle!)

I am going to write a long blog post sometime soon about how lucky I have been especially in swimming mentors, but the person who I must particularly thank now is Brent. He made this whole trip possible for me, and he has also answered the most lavishly copious and detailed and in many cases absurd body of questions about triathlon that has possibly ever been composed in the whole history of the sport.

No race pictures. (I might buy an official one, though it goes against my practice, because I think it might be good for positive motivation if I could get one of myself looking reasonably competent while riding a bike!) But I do have a nice one (courtesy of Brent again) of the lovely blogger meet-up dinner on Saturday evening. 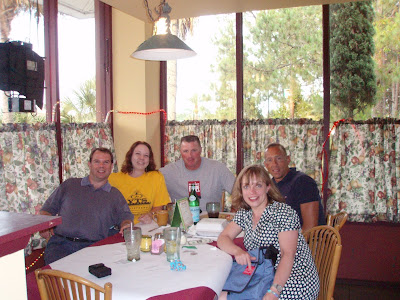 went to results first and saw you're finish time - and then came here to see you posted - Awesome Job! It was very hot, and you kept on going - just practice eating on the bike some more, one-handed, and you'll do fine in NY. Congrats, and great meeting you again!

Excellent job with the race!
And you got to go to dinner with my favorite couple on earth - lucky girl!
Are you planning your next one yet?

Congrats! Good that you took away concrete lessons and that you enjoyed the experience.

Danielle in Iowa in Ireland said...

Awesome job! I am so with you on the trials of the bike - I don't know how people do it, especially here in Manhattan. I think it gets better though - I felt okay until around mile 80 of our ride this weekend whereas by mile 50 of the half-IM I did last year I was practically in tears. I have the same problem with eating and drinking on the bike, I am SO jealous of the people who can go "look ma, no hands!"

Congratulations! It must feel good to have the first one behind you -- wonderful to have learned so much.

Jenny, I have been somewhat out of touch since I last saw you! Great job on the race!! You have been very busy!!
I am so very glad that we were able to meet you and Brent and to enjoy such a nice evening! Please let us know when you are in town again, I'll do the same if we hit NY!
xoxo