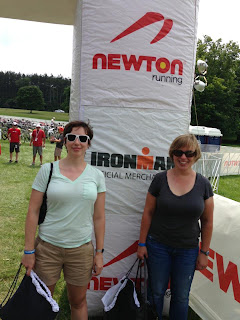 Liz on left, me on right: packet pick-up the day before the race (photo courtesy of Chris).

We would look much hotter and more disheveled/drenched than this by race end the next day. There was a heat wave, it was 91 degrees, it can only be described as gruesomely hot! Very little shade on the run course, and several quite steep hills. It was a slog - huge majority were walking most of it. Dramatic incident: I was at mile 11, Liz a little further, when thunder started rumbling, the heavens opened, lightning struck and they canceled the race! It is a sensible call for an organization to make, they probably had no choice, but it seemed clear to me that it was reasonably safe to continue, and that I wanted the satisfaction of a finish even if it wouldn't be official. They took down remaining aid stations and stopped runners who were at earlier stages, so really I was lucky I had less than half an hour remaining, or it might not have been an option. The police officer who came to tell us the race was off was extremely nice - he said that a homeowner was offering a barn for us to shelter in, that trucks would transport anyone who wanted from there to the race finish. I asked if we were required to take shelter, he shrugged with a twinkle in his eye and I and many others continued our trudge - actually the temperature had dropped about 20 degrees in 10 minutes, so I probably felt a bit better for that last stretch than I had previously. I was beaming almost the whole first 10 miles, though - triathlon is an exhilarating sport even when you are near the back of the pack!

Swim: I only note that I definitely had asthma-related breathing trouble for first half of the swim. It is my theory that putting face in water, even if not subjectively horribly cold, triggers that reflex. There was a swim warmup opportunity that I did not avail myself of, but I will do so next time and see if that helps. It wore off eventually, only the wheeziness remains a residual problem for the rest of the day - it will also be interesting to see whether this precipitates another respiratory ailment, though I can say with confidence that it was much less of an assault to the lungs than hill-related panic that day at Putnam in early May.

Bike: Prioritizing cycling has truly paid off. I'm not fast, but I feel super the whole way. The course is a funny one, the whole first 12 miles is one long hill, including some very steep bits (here's the elevation profile). It is mildly discouraging, even if you knew it was coming, to see the total distance in the very low double digits at the one-hour mark! I got a nice mood pickup around that point. Bike support coverage was very good on the course, and mostly people either have what they need or have a bigger problem than I can help with (busted chain or derailleur). But I always call out to see if a cyclist by side of road needs something, and in this case she called back, despairingly, "A pump!" She had a tube and had changed it already, so I was very happy to give her my frame pump. I am a worrier and think too much about all that can go wrong with a bicycle, so I always race not just with two tubes but with CO2 and nozzle as WELL as my frame pump! I told her my last name and race number so that she could return it afterwards if possible, but I wasn't sure she would be able to retain the information (races are funny). It was a lovely surprise to get back to my bike much later in the day, after aforementioned torrential rain and a period when we were not allowed to retrieve stuff from transition due to lightning, and find the pump tucked into my bento box in a fashion that spoke eloquently to me of conscientiousness and gratitude!

I had seen Liz in transition - our bikes were opposite each other, she's a faster swimmer than I but had started in a slightly later wave. I figured she must have passed me at some point on the bike without me noticing, and it turned out to be the case - I stopped at the mile 40 aid station (I used Camelbak tube hybridized with Source 100oz "reservoir" and my GoLite trail-running backpack, started out with 3 x the "Half Evil" 333 endurance fuel and subsequently topped up with water), and we saw each other there, as she had stopped to reapply sunscreen. My one complaint about the bike course, which was in every other respect both lovely and challenging (and surprisingly good prep for Wisconsin, which has a not dissimilar terrain and profile), was that there were far too many cyclists bunched up - it was pretty much impossible to stay 4 bike lengths away from the next rider, which is the rule, as we were strung out like beads over the entire course. I was probably more like 2.5 lengths behind Liz for pretty much the last 16 miles, and rode into transition immediately behind her, which was funny and nice.

As I said, run was penitentially hot, with many first-timers cursing themselves for having undertaken such a mad enterprise! For me it was always going to be a good training day rather than a race as such, and I was extremely happy with my bike in particular, so I didn't mind doing a lot of walking. I was worried at the cancellation announcement that Liz might be disappointed, but she is an extremely good sport and took it in her stride, was exhilarated by finishing regardless - and then we got a very pleasant surprise back at the hotel. It turned out they had indeed kept the timing mat on and we did get official results after all - that was nice.

I am probably forgetting something, but I need to pull myself together and get out of the apartment to go to my evening meditation class! (I am weary, we drove back today and it wasn't tiring as such but I am definitely feeling residual fatigue.) Rest week begins, only I have to finish revisions to my book manuscript and fly to Cayman on Thursday, so it may be that I need to take some extra days after that to let my body absorb this first block of training....