An excellent workout that so thoroughly used up all my vim that I had to eat a cookie just now in order to have the energy to write a post!

One of the great pleasures of this summer of exercise is that I got a coach - I haven't had one for a long time, I always have some mentors of one kind or another but I'd forgotten what a pleasure it is to have actual formal coaching. So I asked supercoach David Roche for a special birthday workout, and got this back:

Your mission is to touch Grant's tomb, check out the Central Park Zoo, see the Intrepid, and run up the Columbia steps. You decide how to connect them :)

I also wanted to make it to midday spin class and had a swim workout lined up as well, but I knew it would be unlikely that I'd really have energy for that still after doing the first two - indeed I had a short swim post-spin and will do a proper masters workout tomorrow.

Lounged in bed and didn't get out the door early enough to come home between - that was good, though, actually, as it makes it a more genuine continuous workout. Beautiful weather, but slightly hotter than I thought - should have been carrying water, I was fiendishly thirsty by the end. 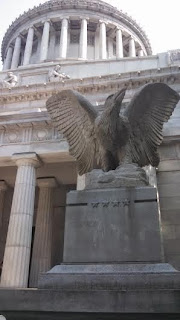 Here is the view from the top of the Low Library steps: 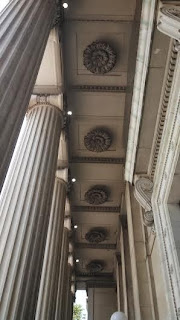 I have no picture for the zoo - I ran over to Central Park and then south along the east side of the park. Got near the zoo around the 1hr mark, stopped and bought a Gatorade and drank it while walking around off the clock trying to find a zoo building to photograph - realized after about 10 minutes that my poor sense of direction really just means I was going to have to let that one go! (I was there relatively recently and did indeed spend much time wandering around trying to find the actual entrance - then promptly forgot whatever I learned about how to find it....)
Then west to the Intrepid: 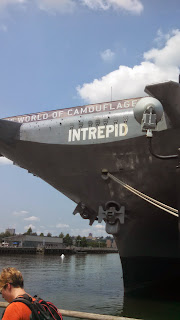 I got to pick the workout since it was my birthday: I couldn't ask for a 43-minute climb, as it's only a 45-minute class and also it might KILL somebody, but what we had was very good: 3 x (4min climb, 3min sprints as :30 off, :30 on). I had a maniacal grin on my face throughout that caused Joanna to snap this picture: 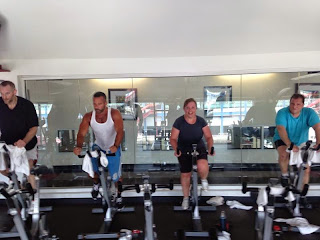 No pictures, didn't happen (those are what I call "imaginary distance units," by the way, not miles or kilometers - somewhere between the two!): 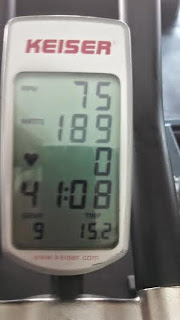 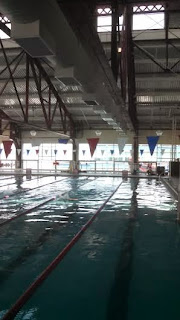 Bonus picture to make up for the missing zoo one, a portrait of the lovely and well-behaved service dog that accompanies its mistress to the pool pretty much every day: 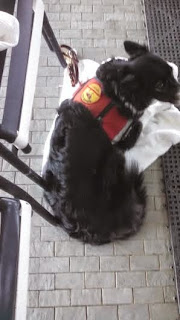 It's a slightly strange summer in that I'm neither training for something epic nor in the middle of writing a book. Makes me feel rather guilty and underoccupied! But it is probably good for the soul not to be quite so busy and focused all the time....

Hahaha! a 43 minute climb...yes, that would probably kill me.

What a fantastic birthday workout!